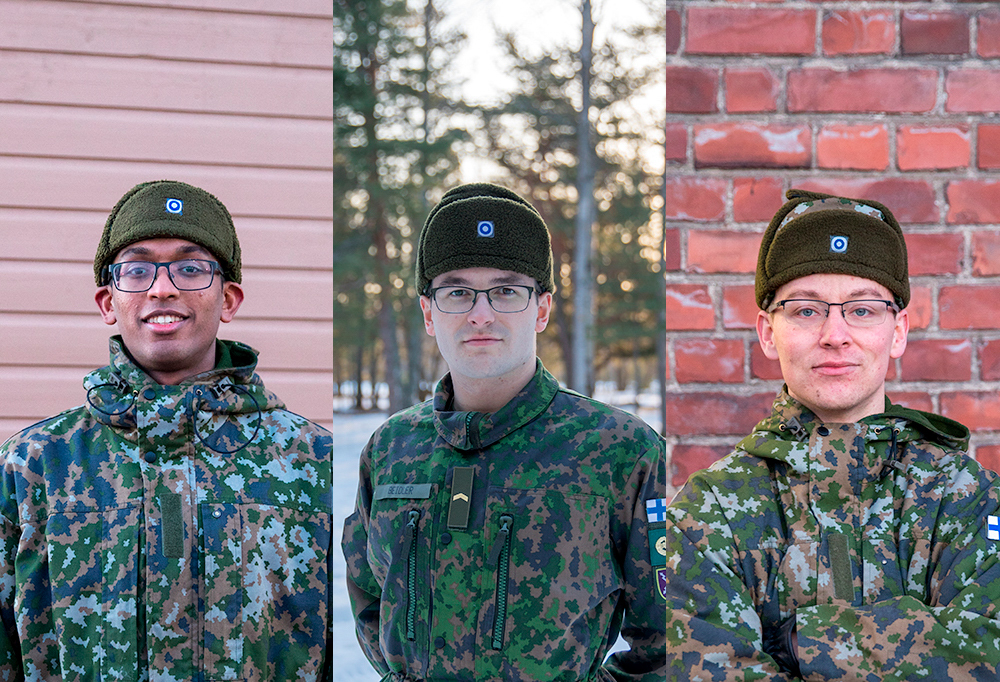 They travelled from abroad to serve – strictly because of the pandemic

Birmingham, Oregon, Arizona. These three conscripts with foreign backgrounds all serve in the Guard Jaeger Regiment and have another thing in common: COVID-19 got them enlisted.

The COVID-19 pandemic suddenly turned around the lives of many young people across the globe. Gajan Ganeshalingam, Max Beidler and Joshua Sutinen are some, who had to adapt to the unusual circumstances on very short notice. Last summer they all traveled thousands of kilometers to enlist in the Defence Forces and are currently serving because of the pandemic. Here's their stories.

Stepping into the unknown

British-born Gajan Ganeshalingam was meant to start his third year in mechanical engineering at the University of Nottingham – that was until the pandemic hit the United Kingdom.

The 21-year-old from Birmingham planned to come complete his military service in Finland at some point, but that wasn't to happen before his graduation. The pandemic, however, changed everything. The UK went into lockdown in March and all universities started teaching remotely. Amidst all this was when Ganeshalingam decided to dive head first into unknown waters.

– My mother's Finnish so I'm a dual citizen, but before starting my service I had visited here only once. That was when I was really young as well, so I barely remember the trip, he explains.

– I went back home to live with my parents when my university switched to remote lecturing. One day a letter came through the door – it was a notice to begin my service in July. I must admit, the whole thing had completely slipped my mind.

Ganeshalingam was initially meant to postpone his service by another year, but decided to latch on to the opportunity.

– I weighed up the situation and ultimately decided to head over here for a year, partly because the situation in England was so dire. My thinking at the time was that now's the perfect time to serve without it interfering with my studies, for one.

Two weeks after receiving the letter, Ganeshalingam was on a plane to Finland.

– The Defence Forces organised everything, from flights to accommodation. You'd think that the whole process would be quite complicated, especially on such short notice, but everything got sorted really quickly and smoothly.

He is serving in the Guard Jaeger Regiment's 2nd Jaeger Company as an urban jaeger, specialising in urban warfare. So far the experience has been nothing but positive.

– At the start I had some difficulty adjusting to life in intti, especially in terms of the language and learning the commands, but everyone here speaks English and my Finnish comprehension has improved a lot. There's also a lot of other foreigners here who I've gotten to know.

– I think a telltale sign of how comfortable I'm here is the fact that even after the basic training period, I still wanted to stay here for a year, he says with a smirk on his face.

After his service Ganeshalingam plans to go back to England and finish university, but the idea of peacekeeping has also lured its way into the back of his mind.

– I'm not sure how likely or realistic that idea is, considering I don't speak Finnish – among other things – but we'll see what happens.

Gajan Ganeshalingam had visited Finland only once before starting his service. (Picture: Konsta Törne)

Max Beidler is currently completing his service as a graphic designer at Ruotuväki – he shapes the face our monthly magazine. Born in California, the 22-year-old studied graphic design at the Rhode Island School of Design and was in the process of finishing his second year there. Then the pandemic hit.

– The situation with COVID got really bad and our school suddenly closed with three months of the semester left. I finished the year remotely from home in Oregon, but other than that I pretty much just sat on my computer. I didn't go outside or exercise at all – it was really depressing to tell you the truth, Beidler explains.

The idea of heading over to Finland for the military was in the back of his mind the whole time, and it got increasingly more attractive as time went by. In terms of the virus, the situation in Finland also seemed a lot better than it was in the United States.

– In the end I decided to come here and do a year in the military, basically have a gap year from school and get it over and done with.

– I sent an email to the Guard Jaeger Regiment enquiring if it was possible to start that July, even on such short notice. They gave me the green light and within a week I was sitting on a plane to Helsinki. The whole situation went from zero to 100 really quickly.

– All the arrangements were really simple: Flights were sorted by the Defence Forces and I got an apartment in Helsinki. It was really straightforward, pretty much all I had to do was say I'd be coming.

Beidler's mother is Finnish. He grew up in Oregon, moved to Helsinki from the United States in 2010 and lived in the city until 2018, when he moved back to the US for school.

His plan was to eventually come complete his service, sooner or later.

– I'm Finnish after all, despite being born in the States and having lived there for half my life. This country has given me so much in terms of education and livelihood, so this is the least I can do.

His time at Ruotuväki is coming to an end, but instead of going home like the rest us, Beidler will transfer to an NCO course for the remainder of his service.

– It absolutely was a good decision to come here. I've gotten valuable work experience in graphic design and now I get to go challenge myself and experience something a bit different to what I've gotten used to so far.

From Arizona heat to freezing Finland

26-year-old Joshua Sutinen traveled to the Guard Jaeger Regiment from the state of Arizona, where he left after losing his job in the oil industry in the middle of the pandemic. Washington-born Sutinen's dad is Finnish, but before starting his military service he had visited the country only twice.

– We were closely following the price of oil at work when the situation with Covid was still developing. I vividly remember how around mid January we were sitting on a job site and just saw the price crash. It was surreal, none of us had ever seen anything like it, Sutinen reminisces.

Sutinen lost his job in early April. His plans to save up and go to college subsequently flew out the window.

– I thought to myself: I need something to keep me busy before the price of oil recovers and I can go back to work. That's when I decided to head over to Finland. I sent an email to the Uusimaa Regional Office and secured a place to start in July.

A few months passed and Sutinen arrived in Oulu, where he has family. The Defence Forces arranged his travel, and everything went as expected – except for one thing.

– I tested positive for the coronavirus upon arrival. I spent some time in the hospital and luckily made it through with no major issues. The "funny" thing was, at the time I was the only confirmed case in the whole city.

He likely wouldn't have enlisted in the Defence Forces at any point if it wasn't for the pandemic. The idea was there, but it would have otherwise been difficult due to practical reasons.

– I especially considered it when I was in the sauna with my Finnish friends and was the only one without an intti-story to share, he chuckles.

Do you think you made the right choice coming here?

– You're asking that question at a pretty bad time, as we just finished our first-aid training with tourniquets. Joking aside, besides that and the cold, coming here was a great choice. No question about it.

Sutinen's time in the military has gotten him new experiences – even a new career path.

– I'm currently in the process of filling my application to become a police officer in Phoenix, and I'd possibly like to work in a SWAT-team in the future.

– I got inspired by my experience here, as a lot of our training as urban infantry is directly related to that line of work. I don't think I would've ever considered that career if I didn't come here in the first place.

Joshua Sutinen lost his job in the oil industry and decided to enlist in the Defence Forces. (Picture: Konsta Törne)